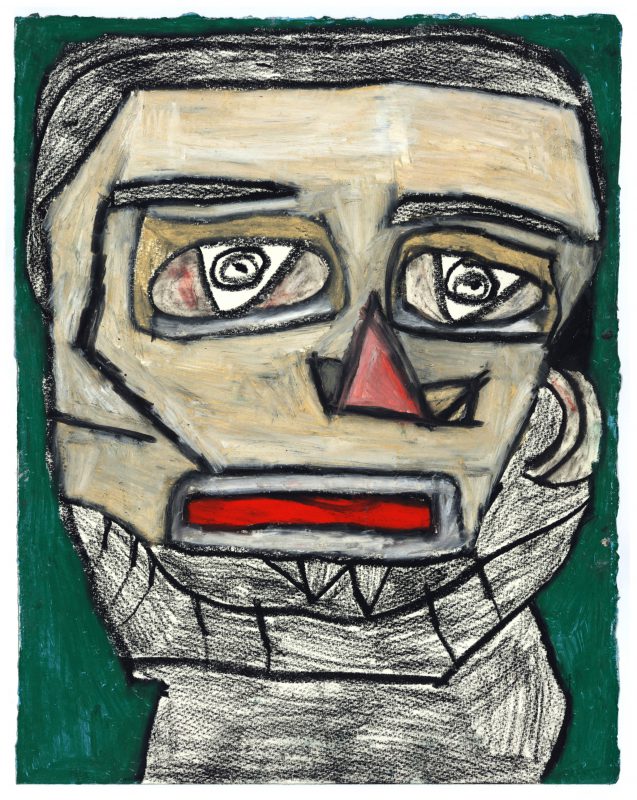 Clifton Wright has been exploring the portrait genre since 2007.  Many of the works he has made in the past decade have taken secondary, two-dimensional sources as a starting point, including family albums and characters from science fiction and popular culture.  A closeness with his subjects was built through re-photographing and working repeatedly with the same image.

A number of the artists in Close: Drawn Portraits allude to or appropriate the portraiture of an earlier generation of practitioners.  Wright’s reference to Picasso is made clear in the title of this and a related body of work that was inspired by his visit to Picasso Portraits at the National Portrait Gallery in 2017.  Taking inspiration from the older artist’s palette, and his abstraction of the figure, Wright took Picasso’s paintings as a jumping off point for pictorial explorations of form and colour:

I look at the original artwork and try to outdo it.  It’s like I’m having a race with it.  I evolve it.  It is the same process whether I am using photocopies of my own artwork or looking at artworks by other artists.[1]

Discarding the dark brown cape that occupies such a large expanse of Picasso’s Self-Portrait (1901), Wright zooms in on his gaunt head and characteristically piercing stare. Exaggerating the linear treatment of features, he transforms the face into an angular, flat edged abstract shape, inside which sit other geometric forms such as triangles and rectangles.  The pale skin colour is built up through layering oil pastel and the lips are a crimson red rectangle, outlined in black and framed in white.  Picasso’s economical Self-Portrait exploits a reduced palette, dominated by dark brown and his signature blue, to make his penetrating stare the subject of the portrait.  Wright’s ‘borrowed’ portrait retains this focus through dramatic cropping and his spare handling of the subject’s hair as dark graphite strokes and background as block green.  Despite the variance in palette, there is a remarkable correspondence of colouration across the two portraits.

‘It is the shapes in the face and the colours in the face that tell me what the drawing is going to be. My work is more about that abstract stuff than who the person is – a face is the starting point, but the point is the picture. I use the structure of how things slot in to the face, and continue it, like a jigsaw puzzle, across the rest of the picture.’[2]