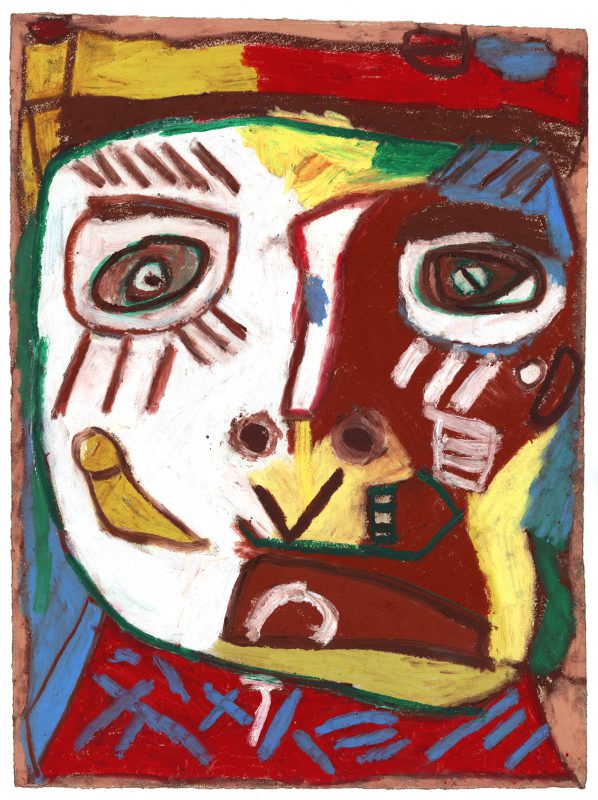 Clifton Wright has pursued portraiture for several years, working in response to family albums, newspaper and magazine pictures, documentation of exhibitions, and characters from science fiction and popular culture. But from the beginning (he started making portraits in the Intoart studio in 2007) the faces in his drawing have been woven into and enmeshed with tessellations of abstract shapes. The shadows playing across a face gain edges, become independent and find echoes in negative space. The way that face and space fit, knot and flow together are clearly the focus of the work, as much as the specific forms of any particular face.

In a recent body of work Wright turns his attention to the work of other artists, including Picasso and Sonia Delaunay. Though conceived as and emerging from drawings, these works tread on painting’s toes. Flat areas of colour press up against layered, textured shapes where successive colours have been applied, or where oil bars have been fingered with linseed oil to ebb them out to translucency. In Green Lips, which riffs on a portrait of Dora Marr, the lips of the title swim in an area of bare creamy paper, its surface only lightly smirched by the artists grey fingerprints. This visible, intimate embodiment of touch operates as a moment of comic tenderness in a patchwork of festival colours. As the edges of the drawing pressure inwards – one half a darker shade of the lips’ green, the other borrowing the acid yellow of the eyes – this dotted creamy field gently but firmly holds the space.

In any portrait there is a particular riddle to be solved around what we are seeing, or who we are meeting. Green Lips 2017 is not a portrait of Dora Marr, and so conventional questions of ‘likeness’ are null, but the drawing reveals a distinct and complex character. The artist is elaborating and portraying his relationship to the act of making a portrait, but the original sitter or subject is absent from the dynamic. Wright engages with Picasso – or his painting – as Picasso engaged with Velasquez via Las Meninas – to borrow / understand / cannibalize a way of thinking, a set of pictorial problems and solutions. In so doing, he steps with increasing vigour into a tradition of artistic becoming.

A dramatic new sense of confidence and complexity erupts in the work as Wright moves into this intimate artistic conversation, and with it, his palette shifts gear, into singing combinations of high-key colour. In several works he uses near-complementary colours: red/green, yellow/purple, next to each other, and repeats their use across the picture, crossing between planes that operate as part of the depiction of the face and those outside it, forcing the foreground and background to compete for pictorial space on an equal footing, and so forcefully activating the entire picture plane. In Yellow Nose 2017 the face is comprised of half white, half brown, and Wright uses the brown block colour as line colour on the opposite side, to describe the eye and brow, the shape of a cheekbone. The yellow of the title actually weaves its way around the edges of the face, describing one half of the jawline, an area of forehead, the hollow underneath the cheekbone, the shadow of the nose.

Where earlier monochromatic drawings such as Black Eye 2010 have the immediacy of a swift penetrating glance, like someone unforgettably glimpsed on public transport, these recent drawings have the intensity of an image built over time. They operate and unfold more slowly. Their layers and networks of interconnected spaces offer contradictions that are rich in evidence of successive decisions, and a variety of textures suggestive of both tenacity and ambiguity. If personality is the province of portraiture, they reveal Wright’s increasing facility and engagement with its labile multiplicities.