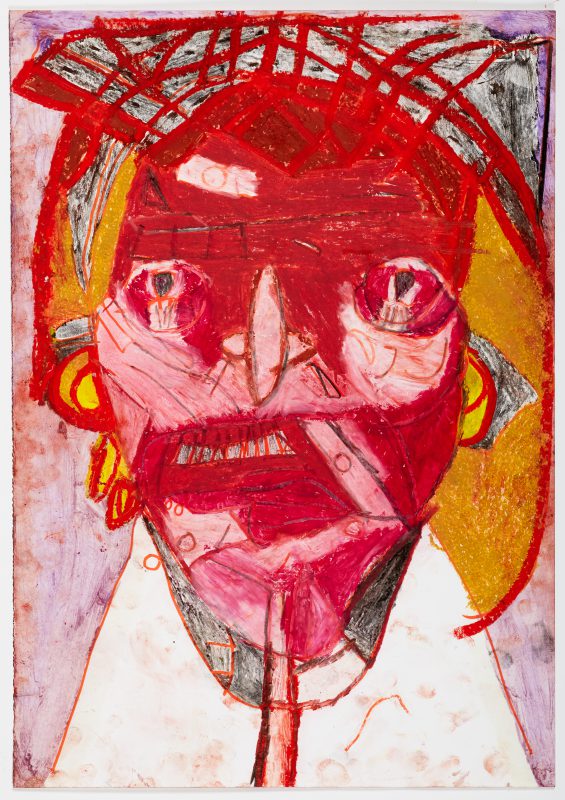 Clifton Wright made his first self-portrait in 2007, in pencil on paper.  He studied himself intently in the mirror and after transcribing a notional outline, fixated on the abstract shapes of his features and of the light as it fell on his face.  Delineating his upper lip as two triangles and one side of his forehead as two rectangles, these unshaded flat planes can be interpreted as reflected light.

Self-Portrait from Mirror (2018) marks Wright’s recent return to working from life, in part inspired by interacting with the artist Dryden Goodwin.  He began by making a pencil drawing of himself, once again observing within his face the tessellation of shapes.  Using a lightbox he transferred this linear drawing onto four different sheets of paper and used pencil, oil pastel, oil stick and charcoal to experiment with the pictorial puzzle of representation.

Continuing to scrutinise his reflection, Wright became absorbed in the close study of variations in his skin colour, relaxing the hard-edged shapes of his working drawing and of his Borrowed Picasso Portrait (p.XX): ‘I keep looking at the drawing and respond to what’s there.  Each mark responds to the last, and to all of the drawing so far.  I make a tension between the hard straight lines and the curves’.[1]  He has captured the light falling on his nose, cheeks and chin through tonal variation and used charcoal streaked over an oily base to depict his dark hair.  A more schematic lattice-work of crimson pigment suggests his upright strands of hair, and semi-circles of yellow his prominent gold earrings.

This work also explores the relationship between the head and the space around it, at times blurring the distinction between them.  Whilst exploiting this confusion Wright has used careful compositional decisions and colour variations to produce a sense of compression such that his acutely observed head is propelled forward and almost transgresses the boundaries of the page.